The band is starting to take off towards their first live. Mafuyu's in charge of writing lyrics, but he can't find the right words and remains unable to write anything. Uenoyama, who knows about Mafuyu's past, doesn't know what to do after realizing his feelings for Mafuyu. This story is about a fledgling band and exposing the past...

A pleasant life with his roommate 067 Edit

Ever since their childhood 097 Edit

An important source of protein 167 Edit 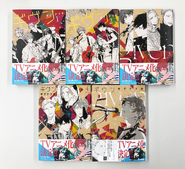 Twitter announcement of Volume 5 alongside the Anime for July, 2019
Add a photo to this gallery

Retrieved from "https://given.fandom.com/wiki/Volume_2?oldid=10595"
Community content is available under CC-BY-SA unless otherwise noted.