Ever since the 7th episode of Given has aired, I couldn't help, but speculate about Kedama, or is their a another dog that isn't mentioned yet? So, this is my opinion on what I'm analyzing from the anime and the manga, so far.

First, let's take a look at both of the dogs. If you don't know these dogs are Pomeranians, which are relatively small dogs that have a lot of personality and grow from 5.12-11 inches. They are cute and adorable with their fluffy coats. Fun Fact: I also had a Pom that I grew up with.

Let's talk about the dog that was introduced to us in the first episode of Given, Kedama! Kedama is a very small dog that is owned by and lives with Mafuyu Sato. Kedama is extremely friendly and energetic towards Mafuyu. We know that Kedama is about 9 months old and was given to him by his mother. As for appearances, Kedama has a very small build with a short white coat that is not fully grown yet and the tail is relatively small and not fully curled.

As for the other dog, this dog is also a Pomeranian just like Kedama, but seems to be a little bit bigger. We can see that the dog is an adult with a long white coat and fully curled tail. This could be another one of Mafuyu's 5 Pomeranians, Tama, Taka, etc. You might be wondering where I got these names. You can read Chapter 12 and 16.5 of the Given manga, where both of these names are mentioned by Mafuyu. Continuing on with the subject, this could also be an error from the animators or a sign of age for Kedama's growth. 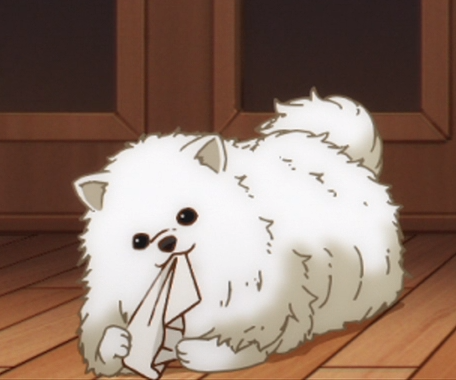 When further episodes and manga chapter are released, we may or may not be able to know. I hope you guy's enjoyed this blog post.

Retrieved from "https://given.fandom.com/wiki/User_blog:DragonKestrel/Kedama_or_another_Pom%3F!?oldid=8553"
Community content is available under CC-BY-SA unless otherwise noted.