Given (Japanese: ギヴン Hepburn: Givun; stylized as given) is a Japanese yaoi/shounen ai manga series written and illustrated by Natsuki Kizu. The manga has been serialized in the bimonthly manga magazine Cheri+ since 2013, and was adapted into an audio drama in 2016 and an anime television series in 2019.

"It's stuck deep inside me and I can't get it out of my head. Mafuyu's voice is an insane and dangerous weapon."

That day, Ritsuka Uenoyama started to feel that playing the guitar and playing basketball, both of which he liked very much, were becoming boring. He then encounters Mafuyu Sato, who's holding onto a broken guitar, and decides to fix it. The moment Uenoyama finishes fixing the guitar, Mafuyu becomes completely attached to him. However, after hearing Mafuyu sing it leaves a deep impression on him. 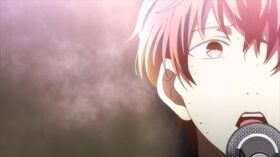