Natsuki Kizu
After the broadcast of the 11th episode and final episode of Lerche's Given, it was announced that a theatrical adaptation of Natsuki Kizu's BL manga is in the works. The Given movie was scheduled to air on May 16th, 2020, but was postponed until further notice due to the 2020 pandemic. It will now be released on August 22, 2020.

News of its release was first announced on September 19, 2019, upon the release of Episode 11, the final episode of the Given anime. The movie was then postponed and was later set to release August 22, 2020. 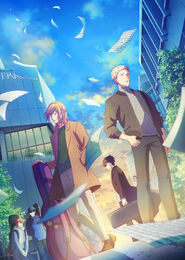 Retrieved from "https://given.fandom.com/wiki/Given_Movie?oldid=15033"
Community content is available under CC-BY-SA unless otherwise noted.