Mirutsuke
The Given (ギヴン) anime adaption is based on the manga of the same name written by Natsuki Kizu. The Given anime is airing on TV - Jul 12, 2019 and is being produced by Lerche Studio.

The TV anime "Given" starts broadcasting on Fuji TV "Noitamina" and other stations from 24:55 on July 11.

"One day, Ritsuka Uenoyama meets Mafuyu Sato and his broken guitar. Seeing the guitar gives Ritsuka feelings of nostalgia, so he decides to repair it. Ritsuka feels like he has no choice but to teach him guitar, but when he hears Mafuyu’s singing, it pierces his heart. Ritsuka invites Mafuyu into his band and the distance between them changes. However, it seems as if Mafuyu, who can’t express his emotions well, is trapped in his own past." 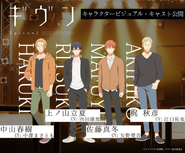 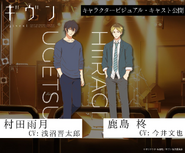 Retrieved from "https://given.fandom.com/wiki/Anime?oldid=11259"
Community content is available under CC-BY-SA unless otherwise noted.